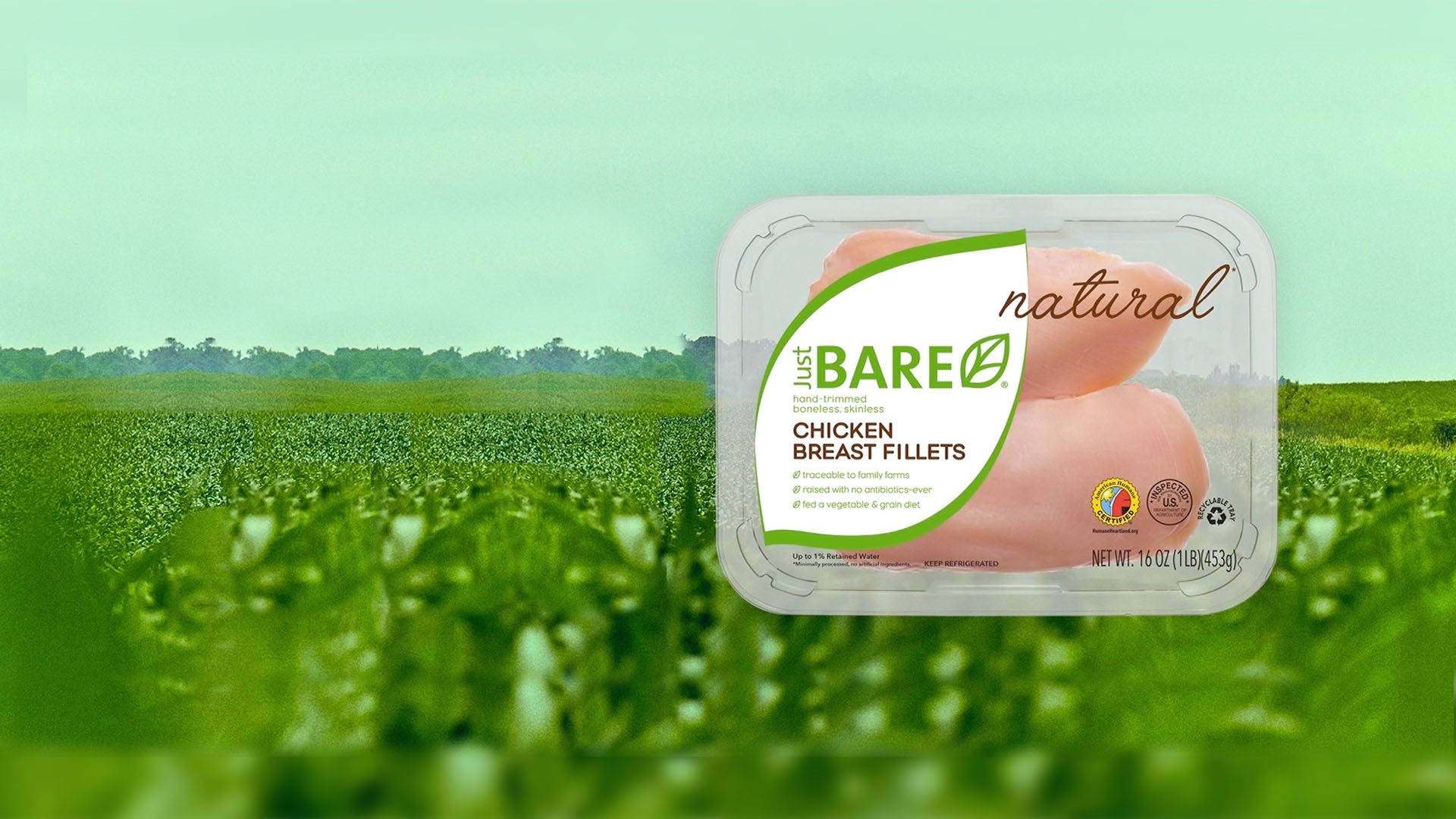 Who makes your food?

For many people, chicken is just that: chicken.  Pretty plain and simple.  A commodity food product that is consumed by nearly everyone, yet indistinguishable between one brand or another when prepared fried, between bread, covered in sauce, or diced into a salad.  A food item that is mostly flavorless by itself and the point of comparison of other food items to which we say, “tastes like chicken.”  Our challenge has been to get grocery store shoppers to buy Just BARE, the new premium chicken brand from Pilgrim’s Pride, after they have already formed long-standing buying behaviors selecting established branded competitors including Perdue and Tyson or private label.  Plus, Just BARE is a premium-priced product, so we needed to create a reason for shoppers to pay more versus their typical default selection.

Reach their hearts, minds and souls

There is a growing population of more than 1-in-4 adults in the U.S. (62.6 million) that specifically buy organic or natural foods while grocery shopping.  Energized by the headlines from their backyard news outlets or world news, we noticed this audience is increasingly focused on food sourcing, especially when feeding their family.  Meat ranked among the top-3 most important items consumers wanted to know food sourcing.  We leveraged these cultural shifts in consumer attitudes and preferences to create an approach that would both reach and resonate with the more than 62.6 million hearts, minds and souls.

Taking a cue from the existing food source code on packages of Just BARE, we created an ad campaign that focuses on five actual Just BARE chicken farmers who take pride in both their community and raising chickens. Shoppers would build an emotional connection with these farmers and Just BARE.  Each ad included a simple demonstration (or call out) on how shoppers could find the food source codes on-pack and how to use their mobile device to unlock the farm area where the chickens grew—while standing in the meat aisle.

A data-driven, cross channel media approach including cable television, online video, radio, social, programmatic display, and out-of-home media was primarily used to drive purchase intent for the brand among these organic and natural food shoppers. Our media flight was heavily weighted around dinner moments and we procured several media integrations including Food Network, Spotify, and Food52.

A post campaign brand health study revealed a 39-percent lift in purchase intent after the campaign exposure.  Those who were exposure to one of the commercials are now 64-percent more likely to buy Just BARE chicken. By the close of 2019, we were achieving 50-percent growth in sales versus the prior year.